On Wilco, Better than Ezra and ‘Mats covers 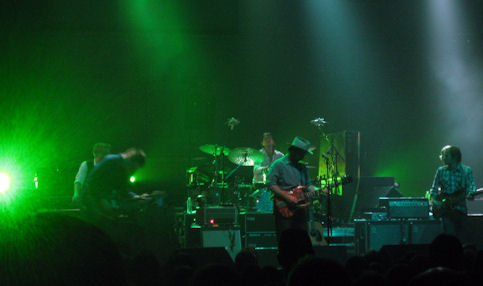 As you can see, I went to see Wilco earlier this week. The set was tight and that little Nels dude can fucking rock the house. Seriously, the dude is like a demon. But this is not about Wilco. Afterall, this is Paul Westerberg.net and not Wilco.net.

This is about how, I was oddly disappointed that Jeff Tweedy and company didn’t bust out a ‘Mats cover during the concert. I really, really had my hopes pinned on them bursting into “I Will Dare” just for the fun of it and to pay homage to Paul and the boys. After all, I have an mp3 of them covering “Color Me Impressed” where Tweedy says, “Everything we are is because of the Replacements” or something to that effect.

And I wish I could say that this disappointment was only because of the aforementioned ‘Mats cover, but it’s not. I am oddly disappointed every time I go see a band/musician of a certain genre and they don’t do a ‘Mats or Paul Westerberg cover during their set. I am not sure why I’ve decided that everyone who comes through Minneapolis should throw down some props to the band, but I have.

Because I have made this decision you would think somewhere along the line I had heard a lot of bands cover The ‘Mats in concert. You could think that, but you would be wrong. The only band I’ve ever, ever heard cover the ‘Mats in a concert I was attending was Better Than Ezra.

It was a concert called Music in the Park or something like that — Jayhawks, Mason Jennings, Better than Ezra and some other people I have long since forgotten. It was a somber affair because the concert happened just a few days after 9/11. I remember this because the Jayhawks were short a person because they were stuck somewhere and couldn’t fly because planes weren’t flying.

Anyway, Better than Ezra (whom I kinda love) sang “Skyways” and ever since I always expect everyone to cover the ‘Mats. Have you ever heard anyone cover the ‘Mats at a concert you were at?