Paul Westerberg.net: Now with more All Over But the Shouting! 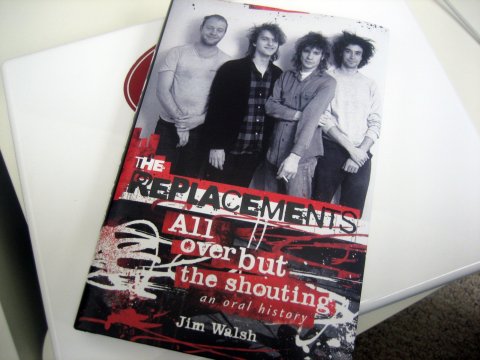 Okay, in honor of the All Over But the Shouting book launch party at First Avenue on Wednesday, November 28th, at 7 p.m. I’ve gotten together all the latest hooha about the book, because I am good like that.

Also, as a warm up to the First Ave. shindig, Walsh will be at that Barnes & Noble in the Galleria in Edina, MN on Tuesday, November 27th and at the Electric Fetus in Minneapolis on Wednesday, November 28th at 5 p.m.

Dan Wilson (who just released the quietly beautiful album “Free Life“) formerly of Trip Shakespeare and Semisonic (and producer of my one of my all-time faves Mike Doughty) writes about reading All Over But the Shouting on tour and “it was kind of exhausting reading the words of so many friends, fans, and colleagues, all confirming my suspicion that the Replacements consciously avoided the success that we all wished for them.”

Vita.mn, the Strib’s alt weekly, gives the book and The Replacements a lot of ink (er or pixels I guess) with an interview with Walsh and some excerpts from the book.
At Reveille, Walsh himself writes about a Hootenanny and a lead up to the big launch party Wednesday (November 28th) at First Ave: The reason “If Only You Were Lonely” is such a universal song is because there’s no “if.” Everybody’s lonely. The Replacements made loneliness feel fun, like a sacrament.

John Davidson at The Big Takeover talks about how he, himself had considered doing and oral history and though he find some frustration with Walsh’s book is overall pleased with the end result.

The Austin Statesmen in Texas gives the book a great write up: But it made for some good stories, many of the best of them preserved in Walsh’s book. This is what people do when they’re no longer young enough to rock and roll all night and party every day. And it beats confronting the at-times discomfiting realities of being, belatedly, a grown-up: Bob Stinson is dead now, having worn out his body a dozen years ago. Tommy is on Axl Rose’s payroll and Westerberg is making quiet records in his basement. We’re bastards of old. Where’s the song about that?

P.S. You can listen to Walsh on the Don Shelby show, here and he’ll be on KFAN 1130 AM Tuesday at 2 p.m. with Chad Hartman and Brian Oake. I am not sure if you can listen on the web site, because the web site BLOWS.