Take your place in back with the loud mouths 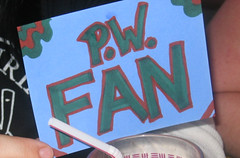 I discovered Paul Westerberg and The Replacements at a time in my life where every single song I heard by Westerberg seemed to be about me. I worked at a gas station and spent my entire 3 – 11 shifts listening to each of the CDs in succession and writing in my journal (it wasn’t a very busy gas station) about how I was sure (and please forgive the 22-year-old melodrama), and I quote “Paul Westerberg had cracked open my heart and put to music what he found there.”

Being sort of a lonesome loner, Westerberg’s music clicked inside of me like nothing else had before. But this is more than about the music. This is about what the music has brought to my life. Because with music, comes music fans.

My first ever Westerberg fan memory came when I had just very recently discovered The Replacements. I was alone at a bar, having arrived earlier than all my friends. I sat there with a beer and sang along with, I believe it was “I’ll Be You.”

I had no idea that this kind of generosity and kindred spiritness was standard operating practice for ‘mats fans.

Not long ago a bunch of Westernerds gathered in St. Paul for 89.3 The Current’s Fakebook with Laurie Lindeen. Before the show, a few of us had gathered at Wolfdogg’s house for a few beers.

It was a gorgeous Minnesota day with sunshine and sweet Georgia breezes. Ohio, Wisconsin, and Oklahoma were all represented. We sat and ripped on each other, gossiped about other Westernerds who couldn’t attend, and reminisced about Westernerd Hootenannys past.

As we snarked and talked about what we hoped the evening would bring, a dark-haired man walked up the steps. All conversation stopped.

He had flown in from LA as a surprise. Nobody had expected him to come, he hadn’t mentioned a thing. But here he was. The night had become magical and we hadn’t even left the yard. At that point any sort of Westerberg was going to be gravy. Really.

See, that’s what Westerberg’s music does. It quite literally brings people together. And I am sure I don’t need to mention to you that Paul Westerberg fans really are the most intelligent, sensitive, good-looking, creative people on earth.

Westerberg’s music has introduced me to a community of amazing people that I would have never known had Kelly McKnight not forced me to play “Merry-go-round” in the (very aptly named) Camaraderie all those years ago.