Paul Westerberg The Craft live at First Ave. in Minneapolis 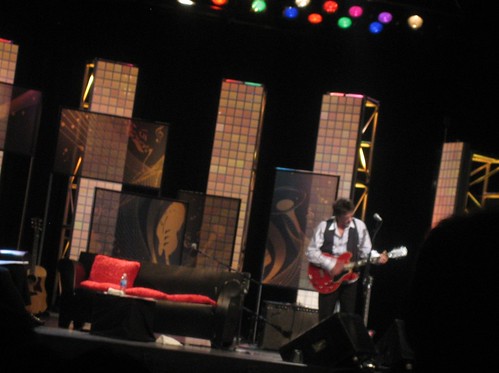 What struck me the most was when Warren Zanes (the dude from the Rock and Roll Hall of Fame) talked about how he always considered “Let it Be” to be the first step Westerberg made toward a solo career. Westerberg didn’t disagree.

They spent a lot of time talking about how “If Only You Were Lonely” and “Within Your Reach” off of “Hootenanny” was really the first break in the band, where Westerberg wanted to go one direction and the rest of the ‘Mats wanted to go in another direction.

Zanes asked him how he appeased the other guys.

Paul also talked about how the difference between a good song and a great song is all in the bridge and that he personally followed the same sort of bridge “rules” that Paul McCartney and Elvis Costello follow.

Oh! The set list went a little something like this:
Let the Bad Times Roll
It’s a Wonderful Lie
Everybody’s Stupid — a new song!
Lush and Green
Make the Best of Me — a new song!
What a Day for a Night
World Class Fad
Dyslexic Heart
Can’t Hardly Wait
Skyway

Paul even talked a little about “Bookmark” (one of my all-time faves) and said that he played, “Bookmark for a year solid before I decided what the words were gonna be.”

At that point he threw out some mad props to Ben Folds, “he writes beautiful and clever melodies.”

Really it was a pretty kickass night. I will write more in the morning when I am a little more coherent (it’s late 1:11 here and I gots to work in a few hours).

Also, check out the Strib’s review of the show and the PiPress’ Ross Raihala has also posted about the show.